Why the heck does the good stuff cost more? 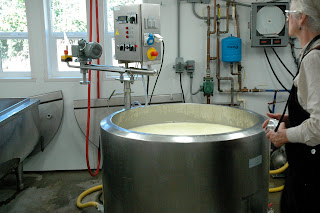 Last week I kicked off what I envision as a series of posts on food system issues. This topic is near and dear to my heart both personally and professionally at the ‘Rind. I touched on some of the key criteria for choosing cheeses and highlighted one in particular: pasturing of the animals.

Pasturing plays a large role in this week’s topic: why the heck does the good stuff cost more?

This will probably be a two-parter with today’s chat centered on the cost of production done the right way and next week’s post shedding some light on the behind-the-scenes, often politically driven, elements that drive cost for artisanal producers versus industrial producers.

As I mentioned, pasturing plays a big part in this conversation. It simply takes more land, time, and labor to pasture the animals instead of keeping them in an icky, sad feedlot. The farmer has to move the herd around and pay attention to what’s growing in the pasture, the condition of the pasture, giving the grazed pasture time to recover, etc. More labor, more time, and more land all add up to higher costs.

The cheeses I carry are made by hand - by real live people - instead of in giant factories. There is, of course, some equipment, like a vat and a somewhat mechanized cheese press (used for draining off whey from wheels of cheese before they go into the aging cave), but most of the incredibly labor-intensive process is done by hand. Again, time and labor.

What equipment there is, plus the build out of a licensed dairy, is tremendously expensive. We’re talking hundreds of thousands of dollars – or more. With so many cheesemakers in the US starting up in the last 5-10 years, in most cases, they started from scratch.

And add to that equation the aging of cheese. Imagine for a moment all the hard work you’ve done at your job this week. Now imagine that you wouldn’t receive a paycheck for 6 or 12 or 24 months for that work. (Would you even keep a job like that?) That’s exactly what happens when a cheesemaker ages a cheese…they don’t get paid for it until they sell it. Meanwhile, they still have to pay their farmhands, make loan payments, hopefully pay themselves something to live on, etc. It’s a wonder we have any cheesemakers at all!

While this piece focuses on cheese, some of the same factors, like pasturing, affect the cost of meat. One of the big differences in artisanal versus industrial meat production is the cost of processing. Small farms pay a whole lot more to get their meat processed than industrial producers, who often own the processing facility and do so much volume, it keeps that cost down significantly.
Posted by Kathleen Cotter at 5:12 PM

Yours truly at Bonnie Blue Farm

About The Bloomy Rind

Kathleen Cotter
The Bloomy Rind, located inside Porter Road Butcher in East Nashville, specializes in cut-to-order American artisan cheeses. A wide variety of unique, handcrafted cheeses fill the case, and we are here to help you pick out the perfect wedge or arrange an incredible platter for your event. Open T-F 11a-7pm and Sat 10a-6p.

Beyond cheese (if there is such a thing)