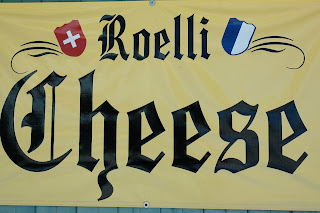 As much as I'm a champion of southern cheeses, I must say Wisconsin has got it goin' on. In August, I went to Madison as part of the Wisconsin Milk Marketing Board's Cheese Tour. They graciously host a group of cheese people each year to visit cheesemakers and show off their incredible dairy industry. Somehow the cheese gods smiled down on the 'Rind, and I was lucky enough to be on the tour this year.

One of our stops was at Roelli Cheese Haus in Shullsburg, WI. For those of you who have been shopping at the stand for a while, you've probably seen and hopefully tasted (and maybe even become hooked on) Dunbarton Blue. For those who aren't as familiar, Dunbarton is a natural rinded cheddar with just a wee bit of blue veining. I refer to it as a gateway blue, because even folks who aren't fans of blue cheese often dig Dunbarton. It's one of those cheese that you can just drizzle some honey on and nosh 'til the wedge is gone - then you wish you'd bought more.

Like so many cheesemakers in Wisconsin, it's a family thang. Cheesemaker Chris Roelli is a fourth generation cheesemaker. But their story has a bit of a twist. The Roellis used to make large scale commodity cheddars until the price of commodity dairy made it impossible to make a living, so they closed up shop back in the 90's. Chris had the idea to make a hand-crafted, artisanal cheese a little over five years ago and talked his family into reopening the creamery. And I, for one, am pretty darn happy he did!

One of favorite treats when visiting a cheesemaker is to taste their cheeses *with* them. Chris and his lovely wife had a platter o' happiness waiting for us, and it included three, count 'em three, cheeses I've never had before. First, a three year aged cheddar that simply melted in my mouth. I took a hunk home with me and couldn't wait to order it for the 'Rind. Then a brand new creation call Red Rock that has the beautiful coloring of Mimolette and just a hint of bluing like Dunbarton, with a slightly denser, creamier texture. Third, and I think this was just to torture us, was a small batch (and no longer available) cow and sheep's milk blend called Ewe Too. It was fantastic.

The good news is that we'll be getting Dunbarton, Red Rock and the three year cheddar this week, Nashville. Plus another cheese that I didn't know he was making called Gravity Hill. I honestly don't know much about it except that Chris said it was 'too good to describe', and the man hasn't steered me wrong yet! 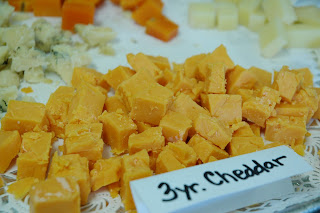 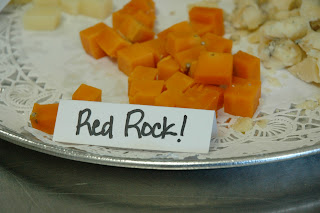 More highlights from the Wisconsin trip soon. Until then, swing by the stand for some scrumptious Roelli cheeses and much more as always!

Posted by Kathleen Cotter at 3:38 PM

Yours truly at Bonnie Blue Farm

About The Bloomy Rind

Kathleen Cotter
The Bloomy Rind, located inside Porter Road Butcher in East Nashville, specializes in cut-to-order American artisan cheeses. A wide variety of unique, handcrafted cheeses fill the case, and we are here to help you pick out the perfect wedge or arrange an incredible platter for your event. Open T-F 11a-7pm and Sat 10a-6p.

Beyond cheese (if there is such a thing)